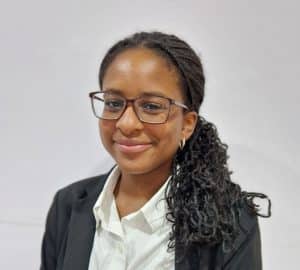 I want to study medicine

Grade 8 LAMDA Speaking Verse and Prose with distinction, Silver Dofe Award (and I’m about to start Gold), tennis, piano, and Model UN. I was part of the school’s Fifth Form ‘nto the Woods drama production last year, and I played The Witch. It was an amazing experience to be on stage acting and singing in front of so many people; my performance was so amazing that even my own wig was blown away and fell off about 30 seconds after I got on the stage for this first time.

Interests out of school:

I have been volunteering at Barnardo’s for over a year!

I was part of Bancroft’s inaugural middle school congress. It was an excellent opportunity for me to be able to work as part of a team and liaise between students and teachers in order to help better our school.

Best things about the Sixth Form:

There are so many things! Personally, I would say that one of the best things about the Sixth Form is being given more independence and personal responsibility. Compared to lower down in the school, the sixth formers get periods for self-study and independent working, which I think is really beneficial as it enables you to organise your work effectively and efficiently. And since these “free” periods aren’t supervised, there is the personal responsibility of finding a balance between work and relaxation, which I think is vital. There are also smaller class sizes in the Sixth Form, so sometimes lessons can feel like a conversation between the teacher and the class rather than someone just dictating information to you.  And there’s also the exclusive Sixth Form café.