Phoebe and Tanisha have been joined by Raya Uzunova and Alina Schumacher in the Aberdare Cup this season, which is a National Schools Team competition involving singles and doubles play. In the regional knock-out phase the girls have overcome several schools including Northwood College and Godolphin & Latymer. They have made it to the Regional Final where they will take on Berkhamsted. This is the furthest a Bancroft’s tennis team has progressed so, at only a few weeks into the summer term, it has already been an “ace” season! 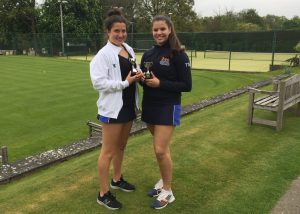 Younger, less experienced tennis players had a chance to compete in” The “Road to Wimbledon” competition.  This is a unique U14 Challenge competition providing an opportunity for schools and clubs to inspire their tennis playing pupils. It is a fun, sociable competition for unrated players, or those rated from a 7.1-10.2. By entering the tournament we gave Bancroftians the chance to qualify to compete in the National Finals on the grass courts at Wimbledon in August.

Twenty eight girls and twenty six boys signed up to play on two consecutive Friday evenings, and, after many hours of round-robins and knock-out stages, two champions emerged and took their first steps on the road to the beautiful grass at SW19.

On a bitterly cold and windy evening, Aimee Bromfield-Brown (3rds) was victorious in the girls’ competition, defeating Anna-Francesca Hammond (L4) in a high quality final, with Abby McKinlay (L4) and Katharine Buckley (L4) came 3rd and 4th respectively. The weather was significantly warmer for the boys and it brought plenty of parents out to watch. Both semi-finals were decided by a tie-break, such was the closeness of the matches. Jude Dannawi (L4) beat Oliver Masson (Rem) 7-5 and if anyone thought it could not get any closer than that then they were wrong, as Gian Lakhan (L4) beat Aarav Shah (Rem) 7-6 on a sudden death point! Gian and Jude then engaged in a titanic struggle, with Gian using his height and strength to good effect and Jude using his speed, agility and tenacity to neutralise Gian’s firepower. Unsurprisingly, the final went right down to the wire and at 6-6 in the tie-break the tension was palpable. Gian emerged as the victor after a deep forehand forced an error from Jude. Both Aimee and Gian now advance to the County Finals in July and I wish them the best of luck.

The events were played in the most sportsmanlike of atmospheres and it was a pleasure to referee such a lovely group of children. I would like to say a huge and heart-felt thank you to the U4th umpires, who gave up hours of their time to officiate the matches, and to Miss Grimwood, Mrs O’Sullivan, Miss Nelson and Mr Pollard. Finally, I would like to thank Mike Wood (who first told me about the competition) and his company, “Freedom”, for all his support and for sponsoring the trophies which were the icing on the cake…or should I say the cream on the strawberries! 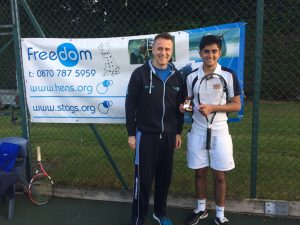