The group began with learning basic moves to the cha-cha, which is the first dance the “Strictly” ‘celebs’ learn.  The pace slowed down when they moved onto the waltz. By now it was evident that some of the group weren’t over confident with telling their left from their right foot but all progressed well enough when moving in a straight line.  However, when they were asked to move round the room in a circle things became a little more confusing and the scene started to resemble pier-end Dodgems!  The final dance for the afternoon was the most complex and athletic: the Charleston.  The routine taught was based on one Robin Windsor had choreographed for “Strictly”; it was fast and furious and included moves such as the interestingly named “scuff”.

After an hour or so of dancing, even at this quite basic level, it was easy to see why the celebrities all seem to drop the kilos, especially when some are rehearsing 12 hours a day.  Dances learnt and it was time for a little competition.  In pairs our dancers were asked first to cha-cha and then waltz with Robin Windsor judging the winners: well done to Georgia and Kiera on their cha-cha and Abby and Marisol for the waltz.

Before our guest teacher left us, we had time for a quick Q&A.  After learning that Robin has been dancing since he was three years old (maybe inevitable as his parents were dance teachers) and that, despite his antipodean sounding accent, he hails from Ipswich, questions turned to matters “Strictly”.  We found out that Lisa Riley was his favourite partner and they are now “best mates” but Mr Windsor was too gallant to say who he least enjoyed as a partner.  As for this year, his money is on Alexandra Burke to win although he maintained Aston should have been in the final if he hadn’t (quite rightly in Mr Windsor’s eyes) been knocked out for his Viennese Waltz which saw him not well served by costume or the production team.

This was an incredibly entertaining and laughter filled session.  Everyone had a go at learning a new skill and agreed that they would do it again given the opportunity.  Thanks to Mrs Whalley for arranging the afternoon. 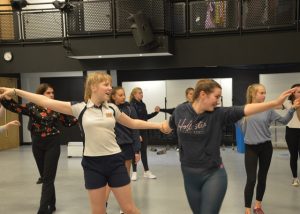 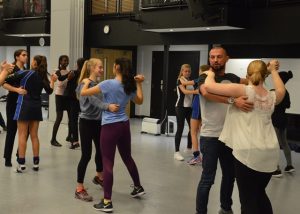 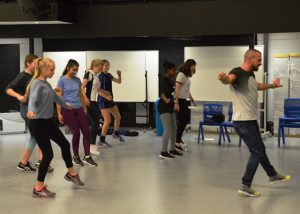 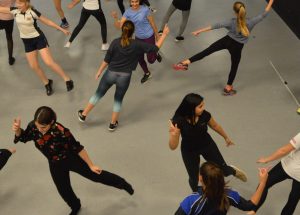