When we arrived at the Museum, we had time to look around. It was founded in 1860 and houses internationally significant collections of geological and zoological specimens. They had Oxfordshire dinosaurs, a dodo and even the jaw of a sperm whale! It is a really interesting museum and I would highly recommend a visit.

As 2pm approached we nervously took our places at the front of the lecture theatre hall and waited for the competition to begin. The quizmaster gave a short talk, then the quiz began. There were questions on all areas of science, from subjects such as human biology, astronomy, great inventors and inventions, physics, zoology, ecology, earth science, oceanography, geology, meteorology, botany and chemistry.

It was a nail -biting race and for most of the quiz we were in third place, then at the last few questions Westminster School took over and we finished fourth with a total of 2085 points. It was a great day and the quizmaster was really impressed with how well all the teams did. Although we didn’t win, we were pleased to beat Felsted, who had beaten us by 25 points in the semi-finals on the final question. 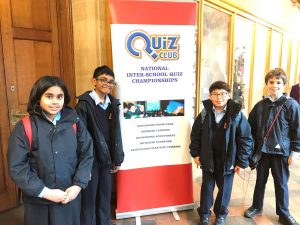