Bancroft’s was represented by L6 Former Victoria Morgan-Couch who spoke on Tracey Emin’s monoprint “Sad Shower in New York”. Victoria had already been selected to present following an internal heat at Bancroft’s.  Of her choice, Vickie said, “It was a card in my collection of postcards that caught my attention just that little bit more than the rest. It was when looking through my collection that I realised that I hadn’t thought enough about that specific image and the reasons why the artist (Tracey Emin) had chosen to create the piece in the way that she had.”  Adjudicator Kate Church praised Victoria’s presentation for her strong opening statement and for how beautifully put together it all was.

Following Victoria’s success at the London Regional Heat she will present at the London Final of the ARTiculation prize at The National Gallery in February. One speaker will be selected by adjudicator. Tonya Nelson, Director of Museums and Cultural Programmes, University College London, to represent London the Grand Final at Clare College, University of Cambridge on 1 March 2019. 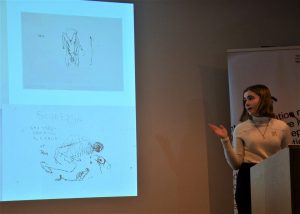 Find out more about ARTiculation