This year, things were by necessity somewhat different.  We held a small outside service in the Quad on Wednesday 11 November: Remembrance Day itself.  Participation was limited to members of our Upper Sixth bubble and some members of staff.  The Rev Ivan Moore, our School Chaplin, led the service.  The Heads of our House – Eden, Tamara, Angelo and Eleanor – encouraged us in prayer.  Two senior NCOs laid wreaths: Manav on the War Memorial in the Quad  and Sarika who laid a second wreath in memorial of Dan Clack and Paul Watkins both of whom were killed while serving in Afghanistan in 2011. Cadets Olivia and Emily were the flag bearers for the CCF and Tamsyn represented our Sea Scouts.

The original plan had been for the service to be broadcast within school, with all pupils watching during lesson time.  Following requests from members of the wider community, it was decided to livestream the service through YouTube,  This was a new venture for Bancroft’s and thanks must go to Mr Siggins, Head of IT and to Mr James, our Theatre Technician, for making it happen – almost without hitch.

The low key nature of the service worked very well and the intimacy seem to lend it a particular poignancy.

For those who were unable to join us on the day, the service can be viewed on YouTube by following this link:

Thank you for organising the (Remembrance Day) broadcast. We found it very moving. I wonder if it would be possible to broadcast the ceremony in future years. Living in Spain there is no commemoration of this day. 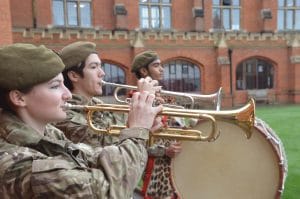 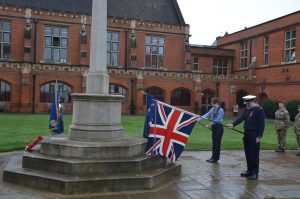