Set in Cambridge 1896, “Blue Stockings” follows the careers of four female students at Girton College.  They cannot be described as undergraduates as, although permitted to study the same courses at the university as the men, they are denied the opportunity to graduate alongside their male counterparts.

From the opening words of psychiatrist Dr Maudsley (Dan Harvey), the prevailing attitudes towards women and education are made clear. Higher education of women is seen as “detrimental to their physiology, to the family and to the future of our society.” His views are countered by pioneering principle of Girton Mrs Welsh (Abby McKinlay) who walks a tightrope between being campaigning (spearheading the fight for graduation) but not political (rejecting the growing women’s’ suffrage movement).

This was an assured production with strong performances all round.  Central are four very different young women.  Emily Christaki (Tess, torn between love and knowledge), Emilia Hitching (the committed Celia), Marisol Rojas (a beautiful display of stillness as Maeve, which contrasted to her breakdown at the end of the first Act) and Vicki Morgan-Couch (wordly and flamboyant Carolyn) are to be congratulated for their rounded and nuanced performances.  Set against them are the male undergraduates: again a very diverse set of characters.  Alex O’Brien showed a great display of sneering misogyny as Lloyd; Kyril Borzenko’s Ralph was ultimately as much of a victim of society’s, or at least his father’s, expectations as the women.  Theo Life gave a very sympathetic portrayal of Will caught between his desire to “belong” and his feelings for Tess.  They were supported admirably by Ben Hughes (Edwards) and Lucas Celentano (Holmes).  Lucy Joyce and Harry Lorrell (Miss Blake and Mr Banks) showed how it was not just the young whose ideals were challenged.

I am privileged to be telling Maeve’s story, one that addresses a significant issue which is still relevant today.

If the subject might sound a little dry, the production certainly wasn’t.  The cast found much humour,  notably from Vicki Morgan-Couch as globetrotting, bohemian Carolyn, Ben Hughes as tongue tied, social incompetent Edwards and Nicole Simpson as the ever present chaperone Miss Bott owner of a fine collection of withering glances..

The confident directorial hand of Ms Middleton was clear.  Her decision to add songs, and even dance, was inspired.  Mr Rob Young’s lyrics to Gilbert and Sullivan songs were fitting and no one winced at a Victorian young man pairing Queen Victoria with Greta Thunberg in his “little list.”  The Three Ladies (Josie Grimsell, Martha Grimsell and Gauri Godbole) displayed beautiful a cappella harmonies throughout and Siobhan Downey, as pianist and Musical Director, is to be admired.

Numerous short scenes in a variety of locations led to a vast number of set changes but Mr Arron Whitbread’s sliding and revolving panels were a neat solution.  Choreographing the cast to perform these changes must have been a nightmare.

“Blue Stockings” was another triumph for Bancroft’s drama.  Entertaining and educating, amusing and shocking, it was an all-round success. 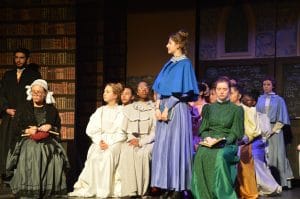 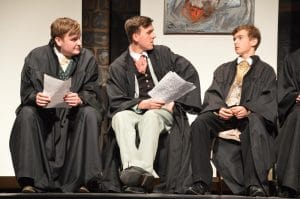 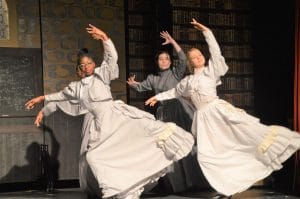 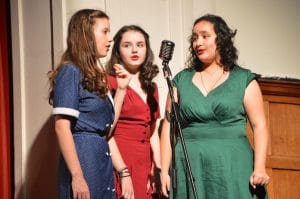 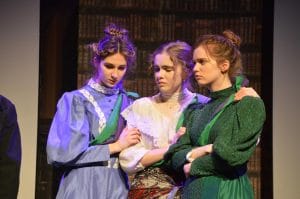 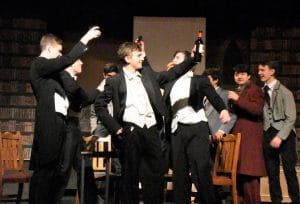 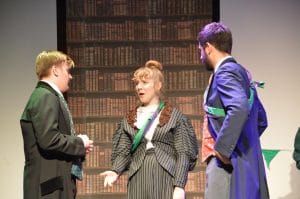 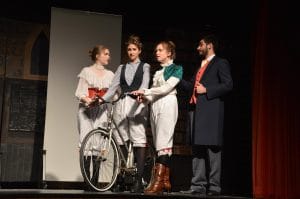