Mrs Whitbread and Ms Entwhistle took on the challenge of directing 53 enthusiastic members of our Thirds, Removes and L4 (years 7, 8 and 9) – something which would have been daunting to many, especially with the copious amount of splurge on stage!  The role of Musical Director fell to Mr Kelsall, while Jemima Strong (U4W) stepped up to choreographing the various dance numbers.

The young cast of “Bugsy Malone” some of whom played several roles, clearly thoroughly enjoyed their time on stage taking on the role of prohibition gangsters and their molls, nightclub singers, boxers and down and outs with ease and confidence.  Louis de Renzy Channer was the eponymous hero, as the first number says, “he can charm you with a smile and a style of his own.” Hollywood hopeful, Blousy Brown, was played on alternate performances by Josie Grimsell and Martha Beavan.  Blousy’s seeming innocence hid a quick line in witty wisecracks.  The rival gang leaders in this toytown Chicago were Dan Harvey and Matthew: Pinto as Fat Sam and Dandy Dan respectively.  Keira Rughani Gandi and Sienna Bhumbra (again alternating) purred “My Name is Tallulah”, the number made famous by a young Jodie Foster.  Incompetent cops O’Dreary (Olly Hughes) and Captain Smolsky (Daniel Fostiak) bumbled their way through proceedings never quite quick enough to pick up on the clues.

The ensemble pieces were tight throughout, performed by a cast too numerous to mention.  They were supported by a well drilled backstage crew and technical team which guaranteed the action flowed smoothly from scene to scene.

The enthusiasm of the cast of “Bugsy Malone” was infectious and ensured that the audiences left with broad smiles on their faces and a secret wish to throw a custard pie or fire a splurge gun! 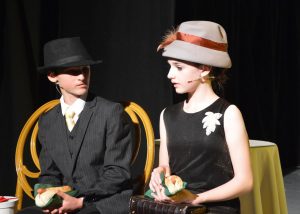 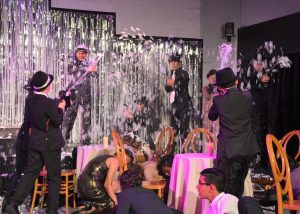 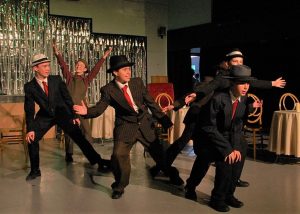 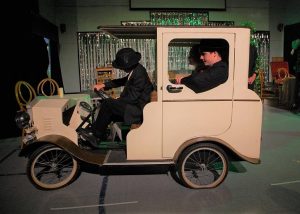