Two foodbank collections were organised throughout the Senior School for Redbridge Food Bank, which has seen demand from local families escalate during the past months.  In both cases we asked different year groups to bring in specific items so that we knew we were providing the Foodbank and its users with items they really need.  Thank you to the House heads of Charity for organising these collections. The Thirds had already taken part in their own very successful collection for the Redbridge Foodbank in November.

We also held a collection for gifts for the Salvation Army’s Christmas Present Appeal.  These will be distributed to local children and young people who might not otherwise receive a present over the festive season.  Tutor group U6Eb, decided to forego their group’s Secret Santa and donated the money which they might have otherwise spent on gifts for each other.  They gave £140 to Wanstead Parish Homeless Shelter to help them provide homeless people and rough sleepers with a safe space, hot meals and support.

North House collected items for a homeless charity called Nishkam Swat.  The charity has strong connections with North House as Sabby Sandhu’s (RN) parents have worked with it for years and Sasha Bhatia (L6Nb)  volunteers for it and gave a house assembly about its work.  Miss Grimwood (Junior House Mistress, North House) said, ” With Christmas fast approaching  we  thought of doing a reverse advent calendar in each form group to collect items the charity might need. North House were amazing.”  Members of 3N were all set  to go into London to deliver food and basic items to homeless people; unfortunately,  they never got the chance as we were put into Lockdown before they could do it.

Our most recent Own Clothes Day, held in November, raised a terrific £1733 for ELHAP (Every Life Has a Purpose) the adventure playground for disabled and disadvantaged children in Redbridge.  Even though the Playground itself is unable to open at the moment, ELHAP continues with its work to support the young people and their families. This is one of the largest amounts we have raised from Own Clothes Days.

A huge, huge thank you to all you wonderful people for your phenomenal fundraising efforts to support ELHAP’s Emergency Appeal.  All of us at ELHAP have been so moved by your generosity and solidarity. 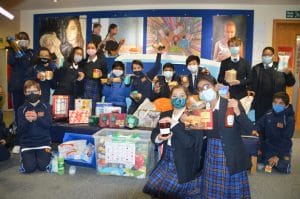 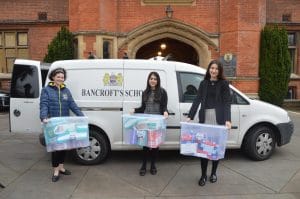