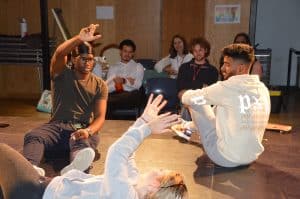 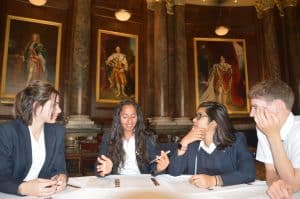 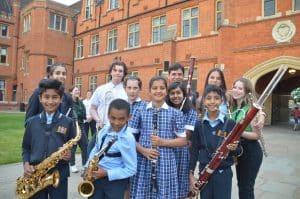 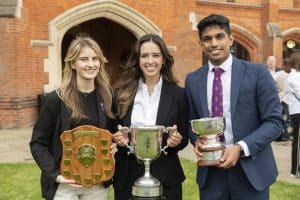 Celebration plays an integral role in any festival and, so, we celebrated the heritage of our Afro-Caribbean pupils as a precursor to a large-scale event in Black History Month and a reworked version of  Visitation Day marked  the achievements of all our U6  leavers and offered an opportunity for them to celebrate alongside parents and staff.  It was also wonderful to see the return of Taal post-Covid in a new form after its forced hiatus; the Sixth Form Taal Committee put on a spectacle of dance, music and drama, involving performers from across year groups for the whole school to enjoy.

The arts were central to the Festival. from the interactive performance of An Inspector Calls for the L4 to the fabulous play in a day, directed by Sixth Former Marisol. We welcomed spoken word artist, Harry Baker, who came to perform for us hot on the heels of his Glastonbury.  Maths graduate, Harry, won the World Poetry Slam with his rhythmic, witty and precisely controlled verse. He spoke to pupils from across the school about the similarities for him between maths and poetry, particularly in pattern recognition and building. The super talented group Showstoppers – regulars at the Edinburgh Fringe as well as in the West End – revisited us for a musical theatre improvisation session.  The U4 were able to explore their creativity by producing 10-shot group-made movie in a One Day Film School.  The Summer Concert moved outside, just right for a balmy July evening, and the Quad reverberated to an endorphin-boosting singalong chorus of Sweet Caroline giving a true festival vibe.  The end of year art show was a great forum to display the  work of our super talented Fifth and Sixth Form artists.

During the Festival pupils were offered opportunities to get out of school- always enjoyable and valuable, but never more so than this year. The Thirds undertook a London Challenge, and visited Dover Castle and Canterbury Cathedral.  The Removes went on a two-night camping adventure – followed by a service learning day in which their activities ranged from litter-picking to gardening at ELHAP, the adventure playground for local children with serious learning needs.  The Lower Fourths were invited to discover more about the School’s history with a visit to the spectacular Drapers’ Hall, which culminated in a special lunch.

This year’s Festival was just the beginning: I know that, like me, many Bancroftians, pupils and staff alike, are keen to expand: to celebrate more of our community, with our community, to extend the ways in which we see ourselves flourishing. Floreat!