DofE Presentation at the Palace

It is extremely rare to have such a large group from one borough let alone one school – a fact not lost on HRH the Earl of Wessex who exclaimed:

They are all from your school?  Now that’s just showing off!

He spent time spent time talking with the group and their parents about memories of their experiences and what they had done during their expeditions.

The Gold Award certificates were presented by Sony Radio Academy Awards winner Luke Franks. He congratulated the pupils on their hard work and resolve needed to complete the award and drew parallels between their achievements and possible long term goals.

The ceremony concluded with a special presentation to two of our members of staff, Pat Morton and Luke Brennand, for their significant input into the success of DofE at the School.

Mr Argyle the DofE Manager at Bancroft’s reflected that, “This number of Gold Awards is a fantastic achievement for our School and represents incalculable hours of work and effort by the participants, their parents and School staff. This wonderful event was a fitting ending to mark a splendid effort all round.”

Gold Award holder Matt Carnell stated, “This was a fantastic experience, and one which I will never forget. The presentation was particularly enjoyable as there was such a large Bancroftian presence, and so it allowed friends from different universities to be reunited and to reminisce about the joys of our expeditions. Visiting such an exclusive venue heightened the sense of celebration surrounding the day and brought home the nature of our achievements; it really helped to draw a close on 18months of hard work; it’s also pretty nice to be able to say I’ve met one of the Royal Family!” 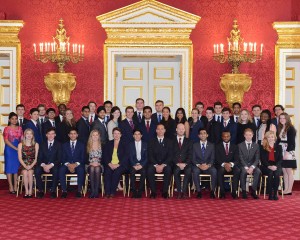