On 7 February, we took 4 teams, each of 3 drivers, to Teamsport Acton for the Regional Qualifiers.  Twenty four pupils had originally tried out for the team, and this was narrowed down to the final twelve through trials at Brentwood.  The top two teams from the Qualifiers would proceed to the Regional Finals.  The Bancroft’s boys planned each race carefully to optimise results and great teamwork ensured they produced them.   Dominant performances came from Max Wieteska and Richard Buckley for the A team, while close wheel-to-wheel racing from the B team’s Neel Tanna and Adam Ugradar secured both the A and B teams place in the Regionals.   Bancroft’s claimed victory in every one of the six individual races, with the Bancroft’s D team placing 3rd and the C team 4th.

The enthusiasm of current Upper Sixth Former and team captain Amir Sampat led to the School introducing a Karting Team three years ago.  In their second year of competing they reached the National Finals, where they finished a respectable 15th.  They are hopeful of repeating this achievement by reaching the Nationals again this year, but believe they are capable of doing better,  Both Amir and teacher, James Foley, maintain that Bancroft’s have their strongest team ever this year.  Amir said, “At the practice session, the top nine 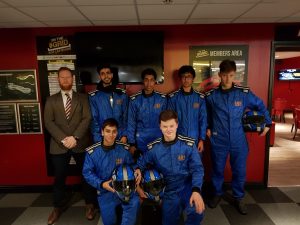 Bancroft’s racers all finished within ½ a second of each other – a clear demonstration of our strength.  I am thrilled to have qualified for the Regional Finals of the British Schools’ Karting Championship.

The School has recently bought race suits, gloves and helmets for the A and B teams so they really look the part; however, they are looking for sponsorship to purchase further kit and to help fund training.  If any parents or Old Bancroftians are interested in offering sponsorship, they should please contact:

It has been great to see the progress of the team’s young, enthusiastic racers through the years. We hope to repeat last year’s success at the Regional Final in April and book our place in this year’s National Final.