The MFL Leaders Team were recognised for their promotion of cultural awareness and understanding.  Their entry made it clear that they believe the world is a better place with an understanding of other cultures especially with the implications of Brexit

During their year 12, the group worked with Mrs Whalley to promote language learning amongst younger children.  They spent time at the Prep School teaching children either French or Spanish, during which they planned and delivered lessons with the aim of making sure each pupil had a positive, enjoyable experience learning a new language.  Having to plan then deliver their lessons, making sure the children were engaged as well as learning, meant they discovered that teaching is difficult and tiring.  Like so much else, their other plans to promote languages were thwarted by Covid lockdown.  They had been busy preparing a Languages Day for local schools, which promoted cultural awareness and tolerance, with activities such as Russian dancing and food tasting, French art competition and Spanish music but this had to be put aside. 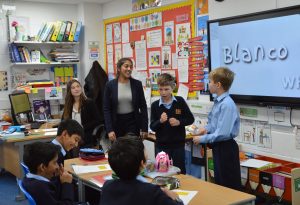 “With Brexit we feel that now is an important time to remain in tune with other countries and foster positive relationships. We can never underestimate the power of culture and far too often this side of language learning is ignored. Our generation wants a world where everyone has opportunity and a voice and where we are tolerant to others who live a different life than we do.”