One of Mary’s lasting achievements was the establishment of the Bancroft’s Foundation to mark the 275th anniversary of the School. She was passionate about expanding the reach of a Bancroft’s education to include those for whom it would have been impossible without financial support.

Mary made the most of her retirement in Eastbourne, walking her dog, travelling, learning Italian and being a grandmother. Mary was active on the Boards of a variety of schools and Chair of Drapers’ Maylands Primary School. She became a Liveryman of the Drapers’ Company in 2019.  Last year she was elected to the Court of the Drapers’ Company and was serving as Junior Warden.

Our sincerest condolences go to her husband Simon, son Fergus and her family.  Mary will be much missed.

We have set up an online book of condolence and hope to present Mary’s family with a printed book containing messages and memories,  If you would like to add your own message, please follow the link below: 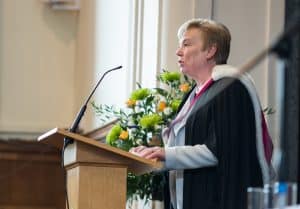