The Bancroft’s team first faced Sevenoaks School from Kent and cruised to a 3-0 win thanks to a hat trick from England U16 player Grace O’Malley-Kumar.  Next up was Parmiter’s School (Hertfordshire).  Although we took the lead with a goal (again from O’Malley–Kumar), this game proved more challenging.  The Bancroft’s girls gave away too many short corners leaving coach, Jo Fryer-Green, in a nervous state on the side-lines.

These two wins were enough to secure a place in the Finals, but the girls were determined to progress in style by winning all their matches.  This they did with a 2-0 win over Cranbrook School, with goals from Vice Captain Eleanor Channer and a fifth for the day from Grace O’Malley Kumar.  Grace was awarded the team’s “Player of the Tournament” title having scored in all three matches.  Under the captainship of goalkeeper Anika Mayor, all the team had played strongly throughout the day, although Emilia Parsons and Kiera Murphy deserve special mentions for their contributions.  Thanks too to coaches Jo Fryer Green and Dan Webster for all their hard work.

This is a fantastic achievement from a very committed and hardworking squad.

The Bancroft’s team now go onto the National Finals which will be played at Lee Valley Hockey Centre, Queen Elizabeth Olympic Park on 3 March 2020.  This is the first time that a team from Bancroft’s has reached the National Finals.  Mrs Jo Fryer-Green, the Coach, was fulsome in her praise for her team, “This team is a joy to work with: so easy to coach  They have shown incredibly focus so far; we just need to make sure this doesn’t slip in the next couple of months ahead of the finals.”

We do not yet know the timing or running order for the Finals, but will make sure they are publicised when we do.  As the Lee Valley Hockey Centre is (almost) local it would be good to see support for the girls on the day. 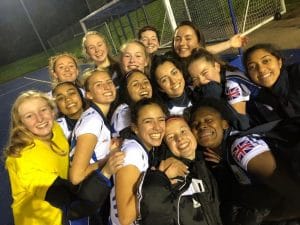