“To Charlie” is one of only nine plays by aspiring young writers to have been chosen in this nationwide competition. On 2 July it will be premiered in a rehearsed reading at the National Theatre.  Emilia has been invited to attend a half day rehearsal beforehand, “I don’t know what, if any, input I will have.  I’m very excited and looking forwards to hearing my characters come alive, until now they have only lived through my voice.”

Bancroft’s participated in the New Views scheme for the first time this year with eight pupils from the U4 to U6 taking part, six of whom submitted plays.  Participants were given a brief to write a one act play, approximately half an hour long on “anything which interested us.” They attended two workshops run by playwright Michael Murphy, who read the first draft of Emilia’s play, “He gave me some very useful feedback, indicating what areas needed development, what worked and what didn’t!”  In addition, the group worked with our Head of Drama, Ms Middleton, developing writing techniques, and characterisation.

Emilia ignored advice to write about what she knows, choosing the subject of single motherhood for her subject.  She summarises the play thus, “Rachel has not spoken to her mother in two years but has no one left to call when she enters hospital to give birth. Two intrinsically different women must co-exist, if only to keep up appearances for the midwife, to allow Rachel’s baby to enter a family at peace.” The play’s themes, however, will resonate with many teens as they are far more universal: parent-child relationships, inadequacies and loneliness. Ms Middleton described the play as “deeply moving, written with a maturity far beyond her years.”  Lyndsey Turner, NT associate director and New Views judge,  said ‘This is a writer who can write character. What a success’

During her Bancroft’s career, Emilia has submerged herself in drama, most often as a performer; she was recently seen on stage as Velma Kelly in our production of “Chicago” (see banner image).  Her first experience of writing and directing was for this year’s West House play.  She plans to continue her involvement in drama at university.  Emilia is currently directing a production of “To Charlie” which will be performed at Bancroft’s during the autumn term. 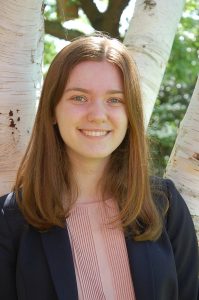