This year the Modern Foreign Languages department has seen a success in applications with three pupils being offers places to read MFL, in addition, three have obtained places for Medicine. Such success is not achieved without a good deal of hard work from the pupils as well as hours of dedicated support and encouragement from their teachers, who have provided guidance, extra tuition and interview practice over the past months.  Members of staff deserve special thanks for all their work and encouragement.

The pupils are as follows:

Head, Simon Marshall, said, “We are delighted at the success of those who have been awarded offers at Oxford and Cambridge – they have worked tremendously hard and it is great that they earned recognition for this. It is increasingly competitive to gain a place at these universities and we are also mindful of those who worked equally hard and were equally deserving of places, but who have unfortunately missed out.”

Overall our U6th Form year-group have received offers from an excellent range of the top universities and colleges and, as things stand, most have a good range of offers for their chosen courses. 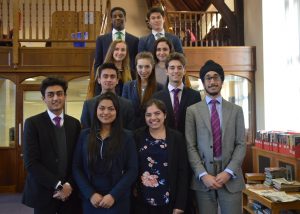