The School was approached to support this project by Schools’ Officer and Cadet Leader PC Kim Gakhal. Deputy Head, Marwan Mikdadi, said, “We had no hesitancy in agreeing to work together with the cadets on this worthwhile initiative and help deliver such an important message to the local community.” None of the cadets involved had any media experience or training but were assisted in the production of the film by Sam Munch-Petersen, from Bancroft’s IT Department.

The video, “Split Second”, received its premiere on Monday 23 May at Bancroft’s in front of an invited audience, which included the Mayor of Redbridge and senior figures from the Metropolitan Police, as well as representation from London Air Ambulance and the Met volunteer cadets. Interviewees from the video were also present, including Mr Ian Levy whose son died as an innocent victim of knife crime in Hackney.

Thank you to BAncroft’s.  The school provided  integral support for this project.

Police Constable Sandeep Gakhal from Redbridge, who worked closely with the cadets and Bancroft’s on the video, said, “The cadets have worked really hard to make this happen, they’ve given up weekends and evenings. Hopefully young people that see the video will also feel the same way and will join us and encourage their friends to join us in pledging their support to stop knife crime.” 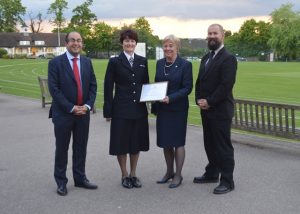