Prep School Thinks “Outside the Car”

The initiative was the idea of the School Council who urged the 300 pupils and staff to make at least a third of their journeys to and from school green.  Children and staff were asked to walk, cycle, car share, take a bus or ‘park and stride.  The target was surpassed as, of the 3,000 journeys made last week, a fantastic 60% of them were green (and that was during a rainy week!)  Head of Bancroft’s Prep, Joe Layburn led by example by riding to school on his tandem, sharing saddles with School Council member Aryan Kundra (Betas).  Aryan said that this was a new experience for him.  Although he is used to riding his own bike, he doesn’t usually ride on busy roads in rush hour traffic. 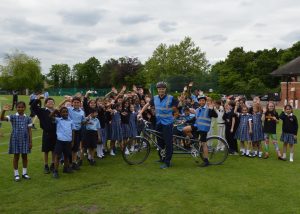 In addition,  Prep 2 pupils were on duty outside school encouraging parents who had driven to be good neighbours and to park their cars with consideration during the school run.  Joe Layburn said, “We know that traffic issues around the Prep School cause frustration and inconvenience, they also make us seem like a bad neighbour to local residents. We’re hoping that ‘Think Outside the Car Week’ will continue to go well and that we may be able to effect some long term changes in the way people travel.”

We believe this will be good for the environment and for everyone’s general health and well being.