Before the service, the CCF marched along Whitehall Road and the High Road, before processing into the School grounds.  Following the ceremony, a wreath was laid on the School War Memorial in the Quad by RSM Ciaran Simpkins, while Ben Harris played the Last Post.  A second wreath was laid by Cpl Isobel Lockley to remember the fallen of World War 2 and later conflicts, including OB Lt Dan Clack, who was killed whilst on service in Afghanistan in 2011. The traditional two minute silence was marked by all those present.  CCF flag bearers were Oscar Saharoy and Jake Botha while the colours of the School’s Sea Scout troop were carried by Sarah Dean and Aarian Judge. 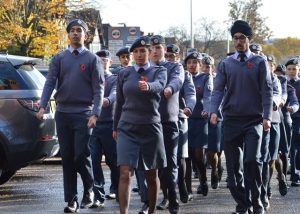 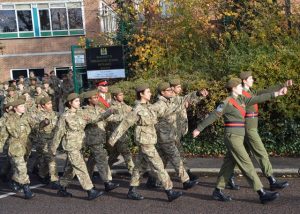