The 80-year-old has twice stood for US president in ground breaking campaigns; he has served as Senator of Washington DC and has made his mark on the international diplomatic stage on many occasions. Over the years, The Rev Jackson has been recognised for his work in human and civil rights and campaigning for nonviolent social change; he has been awarded more than 40 honorary doctorate degrees. He is currently in the UK to be sworn in as an Honorary Fellow of Homerton College, Cambridge, indeed he had to make his way directly up the M11 after he left us for his ceremony in Cambridge.

All Sixth Form pupils, as well as members of the Bancroft’s Afro Caribbean Society, were able to listen to The Rev Jackson and participate in a question and answer session in which he described working with Dr Martin Luther King as “inspirational” and answered questions about Black Lives Matter and decolonisation of the school curriculum.

The visit began with an introductory video which highlighted The Rev Jackson’s extraordinary career over the past sixty years. Mr Philip Harrison, Head of Sixth Form, welcomed The Rev Jackson to Bancroft’s describing him as, “A trailblazer, a pathfinder, a global icon, and a spiritual, moral, and political compass for the World.” Part of The Rev Jackson’s work has been a commitment to youth and, during his visit, he encouraged the pupils to use their votes and voices as forces for change. Sixth former Ambar, said that she found The Rev Jackson’s words “empowering” and that “he inspired us to believe in ourselves and never to be ashamed of who we are.” Jasmine who presented The Rev Jackson with Bancroft’s Community Colours (awarded to pupils who have made a difference in their community), said, “My hands were shaking when I pinned the badge on him. It was really cool and a real blessing to meet someone of such worldwide significance.”

Head Simon Marshall, who presented Rev Jackson with a copy of “Floreat” the Bancroft’s history, described the visit as “an honour”. Mr Marshall went on to say, “It is not often we have the chance to encounter someone who has lived through such interesting times and who has been such a prominent figure in the fight for human rights.” We would like to thank Mr and Mrs Subaskaran and their team for facilitating the visit.

I found the visit really empowering. The way in which we were encouraged to repeat The Rev Jackson’s words inspired us to believe in ourselves. 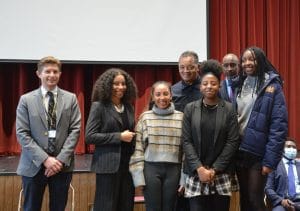 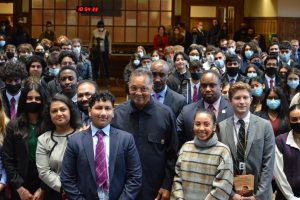 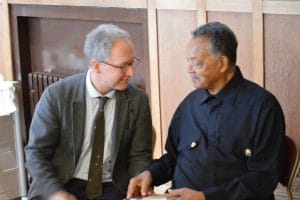 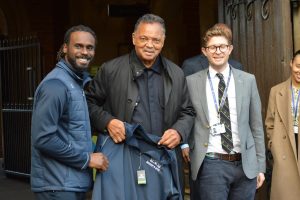