This year eighteen teams of L6 (Year 12) scientists put together their stalls on the theme of “Our Diverse Planet” in the Great Hall.  Two hundred excited Year 6 visitors from a range of local primary and prep schools enjoyed visiting the stalls, listening to the L6 explain some quite complicated ideas and, of course, taking part in the various hands-on opportunities available.  The Sixth Formers hadn’t shied away from tackling advanced ideas such as electromagnetism, the complexity of language and the evolution of Earth’s atmosphere and life forms.

Our guest judge was, again, Dr Elizabeth Swinbank, Honorary Fellow in Science Education, University of York. She described the job of picking a winner as “a challenge” and was most complimentary about the various stalls in her report (this can be read by following the link below).   She had a series of judging criteria on which to base her final decisions.  These were: complexity; clarity of explanation; poster; table displays and demonstrations; relevance to the theme; engagement.  She noted that “every display drew a crowd and each did well according to at least some of the judging criteria.”

The shortlisted teams were as follows.

Dr Swinbank named Tsunami Defence as the overall winner.  She praised them for clear explanation of some key ideas which were conveyed with enthusiasm through well thought out demonstrations.  She also commended them on the design and making of the tank which “was outstandingly good”.   Very well done to James, Ben. Henri and Lewis. The pupil votes indicate that this was also the most popular this year with Change in State (Leya, Vidya, Emilia and Oluwadamilola) being the runners up. It has never happened before that the most popular exhibit was also the one chosen by the judge!

In addition, visitors got the chance to have their passports stamped at the three science zones: chemistry, physics and biology.

Many congratulations to all the teams and organisers of the science fair. A huge amount of work had clearly been done both beforehand and on the day. This work paid off with a highly successful event which I’m sure will have a positive impact both on the young visitors and on the Sixth Formers themselves. 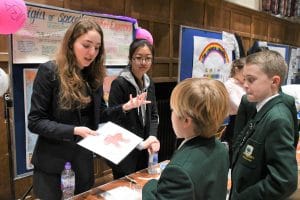 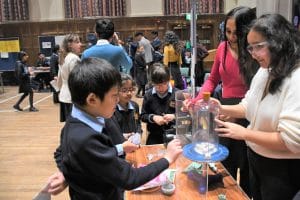 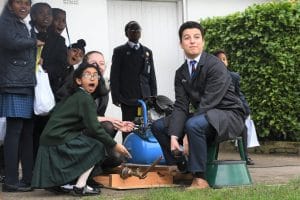 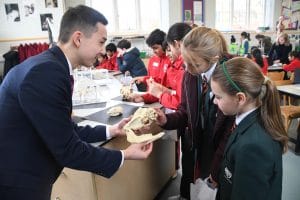 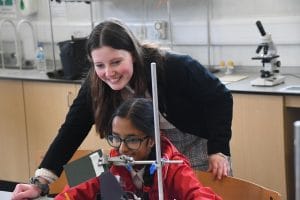 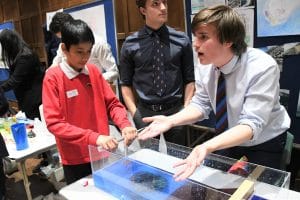