The four Bancroft’s girls had a tough job as they were following last year’s debating competition success, when a pair of Sonali Arora and Dafydd Prole were the overall winners.  Could we perform as well again?  The first round consisted of debates against three other schools on pre-prepared issues: Catalonian independence, the facilitation of immigration and the impacts of religion on society. In the two weeks prior to the competition, the girls had devoted hours preparing arguments and holding mock debates under the guidance of our Spanish language assistant, Cristina Obispo.  Although the level of Spanish among our competitors was extremely high, the Bancroft’s teams conquered initial nerves and soon got into their stride.   In particular, they enjoyed the lucha encarnizada (fierce fight) sections which presented the opportunity to deconstruct the oppositions’ arguments.

The combined points of both teams in the first round placed Bancroft’s in third place and took them into the semi-final against Eton, who were the leaders at this stage.  This meant they had to prepare arguments both for and against a previously unseen topic:  the ethics of the death penalty and its possible impacts upon Spanish society,  After researching the topic for  the allotted time of just 10 minutes,  Lydia and Soumya were chosen to represent Bancroft’s in the the semi-finals.  A win against Eton, and they had  qualified for the finals debating against Westminster School. Another new topic and another intensive period of research: this time, the girls had to argue in favour of the legalisation of guns in Spain.   The final proved most intense with both sides arguing hard.  A brilliant performance by Westminster won them the title, but the Bancroft’s teams had put in outstanding performances throughout the competition. 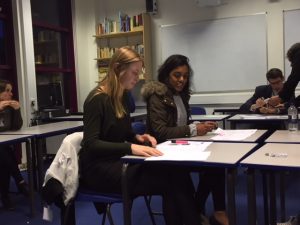 I feel that the competition was an incredible opportunity for the four of us to improve our Spanish, as well as our ability to think on our feet and spontaneously construct valid arguments.