The event is totally student driven with members of the Hindu, Sikh, Buddhist and Muslim Society writing, choreographing and directing the event. This year’s script was a Bollywood style update of Jane Austen’s Pride and Prejudice, written by Fahed Gani and Shaan Mann (both U6); Shaan also was the Director and oversaw the choreography.  In addition, the Bancroftians assume full responsibility: everything from finding sponsorship from local businesses to sourcing costumes.  Shaan said, “Taal is a chance for Bancroft’s pupils to embrace and show off their culture and different talents which they might not be able to show in regular School events.  I was so proud not just at putting on a large scale production but also at bonding as a family with the rest of the Taal team. This year was particularly special because of how much we connected.”

I felt privileged to be part of such a spectacular event, with pupils from all year groups and cultures coming together to raise money to support our commitment to Takok Charai school in Cambodia. In a short period of time the pupils managed to put together an adaptation of Pride and Prejudice, which made use of every opportunity presented to include a dance and some uplifting music. Well done to them all; they did Bancroft’s proud.

Taal is also a major fund raiser for charities and this year it is supporting United World Schools, a charity which is transforming the lives of some of the poorest and most vulnerable children in the World through educational opportunities. UWS builds schools and provides a free basic education for children who would otherwise not receive any education.  Jack Clark, School Partnerships Director at United World Schools, was a guest at the Friday night performance, which he described as “spectacular”. We hope that this year’s Taal will have raised ten thousand pounds for this charity. 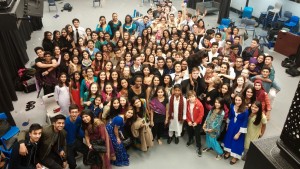