The “Tate Year 3 Project” is one of the world’s most ambitious art projects and will capture tens of thousands of school children aged between 7 and 8 during an important year in their development. The resulting artwork will provide a fascinating picture of the diversity of the community within London, and the images will be digitally stored for posterity within the national collection. No details of individuals will be known or stored. Oscar and Turner prize winner Steve McQueen is the artist behind the project; he said “The idea came from thinking about my past and my present and how I got here. I wanted to have an idea of the map of London, the future. London is very much in my heart. It’s very much a part of me and what shaped me as a person.”

Between November 2019 and May 2020, the exhibition in the Duveen Galleries of Tate Britain will be taken over by hundreds of class photos from London Schools. Children from all participating schools will be invited to find themselves at the exhibition

Photographer Deniz, said that she is one of a team of 6 who are visiting 70% of schools in London Boroughs over a 7 month period. She commented that the take up from schools has been most encouraging and the massive artwork will feature 70,000 children and will be a lasting snapshot of London’s schoolchildren in 2019.

Before Deniz actually took the photos, she talked to the children about photographs and how to look at them: what do we find out from a photo? And what is kept hidden from us? Some war-up games followed to relax the classes before Deniz arranged the carefully – all photos are taken using the same set up. At this point we were asked to refrain form taking any more photos!  It was then time for everyone to say “cheese”  and so become part of history. 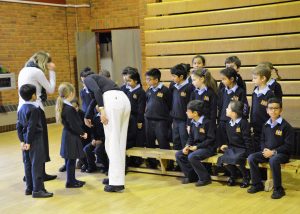