The Armed Man at Bancroft’s

Commissioned by the Royal Armouries in 1999, the work reflects on the passing of “the most war-torn and destructive century in human history”.  Taking its framework from the Catholic Mass, The Armed Man draws upon texts and music from many different religious and cultures.  The work is by turns disturbing, rousing, contemplative and poignant but ultimately ends on a note of hope.

The long hours of work and rehearsal which had gone into the performance were evident and the soloists – Yusaf Shahzad, Emilia Hitching, Sonia Sagoo, Gauri Godbole, Matthew Pinto, Martha Grimsell and Tom Jackson – are to be congratulated.  A massive thanks must go to our Director of Music, Mrs Julia Whitbread, for all her work creating this very memorable evening.  Mrs Whitbread said, “It was such a privilege to bring together so many parts of the Bancroft’s and local community. Rehearsals with the adult choir were a real highlight, with much laughter and some wonderful singing. I have received many messages since the performance of The Armed Man.”

“The performances and practices drew our whole community  together in a way that we were all enriched. I have lived here 42 years and I met ‘Woodfordians’ who I hadn’t seen for years. The Bancroft’s Choir and Sinfonia were superb, their joy and enthusiasm were epic and the  soloists amazingly confident.”

Adult Soprano from the Arts Society 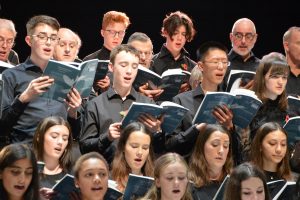 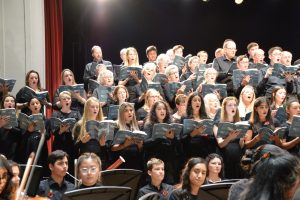 The following morning, members of the present Bancroft’s community joined together to pay their respects to and to remember members of the past Bancroft’s community who gave their lives for our freedoms during conflicts.  Remembrance Sunday is always a very special day in the Bancroft’s Calendar.  The CCF was on parade with RSM Madhav Narayanan laying the wreath on the War Memorial in the Quad, while CSM Ali Ullah placed a second wreath inside the School by the board in memory of Dan Clack and Paul Watkins, both of whom were killed in 2011 in Afghanistan.  The Sea Scouts and Cubs were well represented with the Cubs leading the congregation in the Prayers of Intercession during a moving service led by the Rev Ivan Moore. 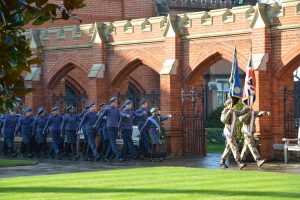 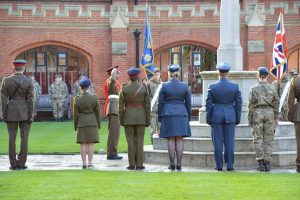