Firstly, congratulations to Danielle Amouzou-Akue in L4E who was named as the winner of the age 13-17 age group in the nationwide “Nature on your Doorstep” competition.  During lockdown, children and teenagers aged 4-17  were invited to write about the wildlife outside their windows in a search to find the UK’s most talented young nature writers.  The competition had three categories 4-6, 7-12 and  age category 13-17.

Judged by a diverse team of wildlife writers, champions and publishers, the competition saw entries from all over the UK – from the tip of Cornwall to the centre of London to the island of Fair Isle. The winners in the three categories each received a pair of Savanna binoculars from Opticron, as well as benefiting from a plethora of prizes for themselves and their classmates.  Prizes including several ‘money-can’t-buy’ experiences, such as spending a day at the RSPB headquarters in Sandy. Most impressively, the winners will get to see their stories in print, published in a future edition of BBC Wildlife magazine.

Nature author and wildlife storyteller Lucy McRobert from Leicestershire organised the competition. She said: “I, and all the judges, have been so moved by the stories we have received. We have laughed and cried and mourned and smiled and learned lots, too. It was a hard competition to judge, but the diversity of stories – from different backgrounds, ages, cultures right across the UK – has meant for a magical experience. They connected with nature using all their senses and emotions. It’s magical.” 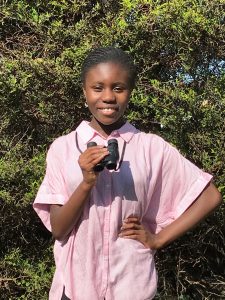 Danielle’s story follows a nightingale as she flies across Europe on her migration north to return to Essex, wondering what has scared all the humans into their nests. Whilst humans hide from an unseen virus the birdsong can be heard more clearly and nature thrives. Danielle said: “When I saw the competition, I wondered what nature I had on my doorstep. I decided to investigate the birds in my flowering pear tree, using the sounds they made as well as what they looked like and the colour of their feathers. I stumbled upon a track of different birdsongs on YouTube and realised I had heard similar sounds before in my garden. I used the nightingale as my inspiration. He became my main character and I began to think what it must be like for him and other birds coming back on their migration to a completely changed world under lockdown. Nature is a huge inspiration for me, and I love to explore. Another wonderful thing about nature is that it can be recorded in so many different mediums and I’m so pleased to have captured and conveyed a little of its beauty in my piece. I am so thrilled and grateful to have won.”

I’m thrilled that Danielle won her category – I loved her story. She writes with insight and compassion and hers is a timely tale too, one we can all relate to, whatever our relationship with the natural world may be.

Author and journalist Jini Reddy, one of the competition’s judges

Well done to Sarah Sayid (U4N) who has been named as one of this year’s winners in the annual Young Reporter competition organised by newspaper publishing group Newsquest Media Group.   The competition requires the budding journalists to source, research and then write eight articles across an eight month period about local events and events pertaining to their neighbourhood.  Sarah has yet to be told which one of her eight articles secured the prize for her.

The competition, which has been running annually for 12 years, is open to pupils in year 10 through to year 13. All their articles are published on Newsquest’s online local newspapers, so giving the “reporters” the opportunity to build up a portfolio of their work to use with their CVs and UCAS applications.  Rob Young, of Bancroft’s English Department, who co-ordinates the scheme at Bancroft’s said; “The Young Reporters scheme is a fantastic opportunity for our students to get some experience at writing, but also crucially forces them to organise their own work and deadlines. It is no mean feat to complete the year-long programme, and to win something at the end of it is a lovely bonus!”

Finally, in this trio of young writers, congratulations go to, Anika Vijay who has had a poem “Wilted” published in Trinity College, Cambridge’s collection for young writers, The Litmus.