The boys played seven matches against other local schools, including Chigwell and Forest, as well as Felsted and Coopers’ Coborn, both of which have strong hockey credentials.   The Bancroft’s team managed a most impressive straight run of seven wins, so achieving the maximum score of 21 points.

Although this was very much a team effort, three players deserve special mention.  Jacob Jayaraj ran the midfield selflessly with composure and power while Oscar King, a Thirds pupils, created havoc in opposition defences despite being a year younger than the rest of the squad.  Theo Life demonstrated his class as the goalkeeper, making some fine saves.

The boys played very mature hockey, despite their young age. They distributed the ball quickly and created a wealth of chances. I was very pleased with their goal ratio – scoring 21 and conceding just 2.

This was a great day of hockey with fabulous performances from the whole team and a great team ethos. Now the preparation starts for the East Regional Tournament, when they will represent the county, on 3 March. 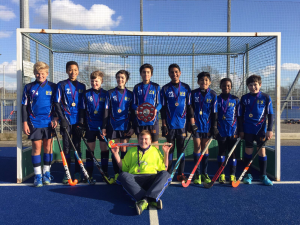