U16 Boys Progress Through Regionals

A very impressive 2-0 victory over The Perse in the first game of the day was the perfect start. Max Sydenham scored from a well worked short corner and Nathan Rose finished off a beautiful through ball from Zayne Avril to stave off signs of a fightback from a very skilful and determined opposition.

The day’s second game against Framlingham was an equally impressive but infinitely more nerve-wracking win. Having fallen behind early in the game, the boys showed impressive resolve to equalise just before half time, with Nathan Rose again keeping his composure in front of goal. Another Sydenham goal from a short corner put Bancroft’s 2-1 up shortly after the break and when Nathan Rose was on target once again the points seemed safe. Framlingham, predictably had other ideas, and a quick response set up an incredibly tense finish at 3-2 with Bancroft’s withstanding a barrage of short corners in the last play of the game to hold on for the win.

With six points secured, the other two protagonists, Framlingham and The Perse drew 1-1, leaving Bancroft’s in pole position; two further wins from the final two games meant the boys topped the group convincingly with a maximum haul of twelve points. They are now into the East of England finals in Norwich, where the top two from a round robin tournament involving Bancroft’s, Bedford School and one other TBC will progress into the national quarter-finals.

This was a very impressive performance from a very impressive team. They showed a great positive attitude and team ethic throughout; the comradery was matched only by the skills on display. Congratulations to the whole squad and we wish them the best of luck going forward in the competition on the 8 March at the University of East Anglia. 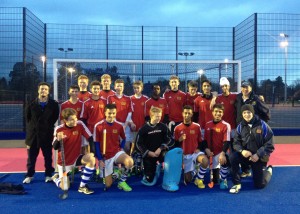