The team undertook various fund raising activities and learnt a lot along the way about team work, problem solving and even accounting.  They admitted that they were a little naïve about finances when planning their Chocolate Santa Delivery. An initial pricing error could have resulted in  overall losses. They also had the challenge of  sourcing  enough identical chocolate Santas to meet demand.  The team were unanimous that their most successful event was a sponsored walk along the length of the Northern Line.  Chris said that they wanted it to be an interesting walk, taking in central locations to boost their fundraising and not just covering places they knew.  Not all events were money raisers; some, such as a litter sweep, were to raise awareness.

When asked about the most challenging part of the campaign, the team answered as one and without hesitation “Lockdown” which really hit their morale.   They explained how they had been prepared and ready for events, such as Neon Night for Thirds and Removes, when everything came to a halt.  This called for some serious creative thinking.  Ayesha explained that popularity in home baking during lockdown led them to create their own on-line challenge “Bake, Donate, Nominate”.  The team posted their own recipes on their Instagram account and encouraged their friends to follow suite.  Chris’ mini egg brownies proved a great success. Although this was intended more to raise awareness than to raise money, they still managed to keep the fund raising going and the baking campaign brought their grand total to £2,353.27.

Nebula had just three days to prepare for the semi-finals, which should have been held in the Houses of Parliament and the replacement Zoom call was definitely not as glamorous! As their prize the members of Team Nebula should get to go to India where they will join with the winning team to teach in schools in Chennai. Sadly this exciting trip will need to wait until conditions are again safe.  In the meantime Team Nebula “are all looking forward to continuing our involvement with WOHAA as volunteer mentors for future participants.”

As part of their submission, each team, had to make a video about their experiences; you can find Team Nebula’s video below:

The determination and organisation of Team Nebula has been deeply impressive from the first. Not only have they wanted to raise real sums of money, but they have also wanted to develop their ability to think creatively as a team, developing essential skills and awareness of the needs of others. 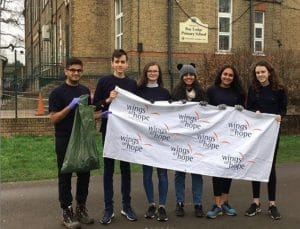